There are a number of typefaces that are disliked by many people, often for a variety of reasons.

Below are the worst fonts according to a November 2008 poll on this site. The list starts with the undisputed leader, the most hated font in the world. I have included quotes from various web pages.

“The AOL of fonts”
“Comic Sans is the dirt bastard of the design world.”
“An e-mail written in this font makes the sender seem ridiculous and out of touch.”
“I honestly think when I see Comic Sans that the person has a lower than average intelligence level.”
“It’s not that it’s a terrible font – it’s rather that it suits non-designers far better than those with a sense of the aesthetic would like.”

“So 1950’s”
“Arial is little more than a shameless impostor.”
“Arial’s ubiquity is not due to its beauty. It’s actually rather homely.”
If you’re working in a medium where you’re not restricted to certain fonts, and you’re considering using Arial – don’t.”
“Arial is the poster child for the general typographic decline of the late twentieth and early twenty-first centuries.“

“Very corny and boring”
“I just avoid when I can.”
“It’s simply bad, ugly and makes me nervous when I see it.”
“I cannot look at Times New Roman without automatically assuming that it is a placeholder font, waiting to be replaced by something appropriate for the text.“

“Brush Script is a useful tool for identifying morons. It is the typeface equivalent of the backwards-worn baseball cap.”

“dull, unimaginative, plain”
“Courier always reminds me of sending a job to the printer and forgetting to include the fonts.”

“Papyrus: The official cool font for those who know nothing about typography.”
“I was an early user of Papyrus. I used it a lot for a long time. These days I hate it just like the rest of you.”
“When I visited my brother in South Dakota last year, nearly every billboard or pamphlet at the Rushmore Memorial Center used Comic Sans or Papyrus…. Ugh, barf.”
“I’m branding myself with this font. My website has to be in Papyrus! The text and everything!”

“I hate Helvetica. It is everywhere. No more Helvetica, please!!!!! It is sooooooo boring.”
“I have never used it because of its stiff and kind of aseptic character.”
“Helvetica is the Bluejeans-Sans Serif for the daily worker.”

Other fonts that get on some people’s nerves include Avant Garde, Curlz MT, DIN, Hobo, ITC Garamond, Optima, and Souvenir.

A special mention should go to freeware fonts in general. There are beautifully designed typefaces that you can download for free, but there is also a lot of crap with incomplete character sets or badly drawn glyphs.

Of course, a careless designer can make any text or typeface appear bad.

“There are no bad typefaces, just bad designers”
“Hello, my name is David and I am a font abuser…”
“The fonts aren’t the problem, it’s the idiots using them badly that make us all cringe”

If you’re interested in other pages about unpopular fonts, try the one on America’s most fonted or this rant about 5 terrible fonts. Last but not least, there are fonts from hell. Techmeme also has an interesting forum post about unpopular fonts such as Comic Sans. To finish off here is one of Wondermark‘s beautiful cartoons on the subject. 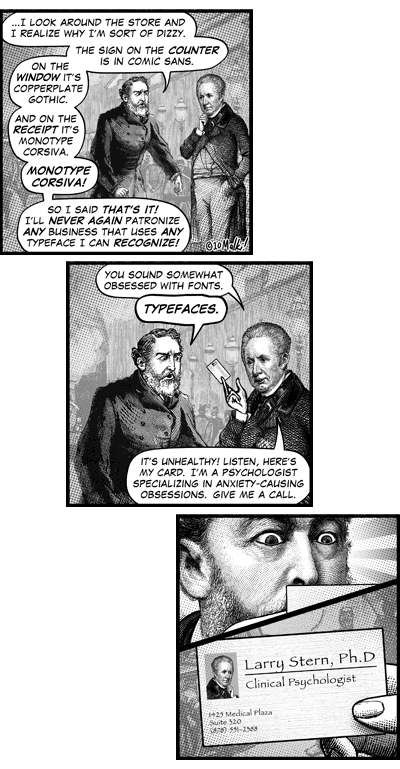 39 thoughts on “Most hated fonts”