The A.B. Dick 350 is a small one color printing press which will remain in production in the US until 1986. This duplicator creates the business of quick printing. 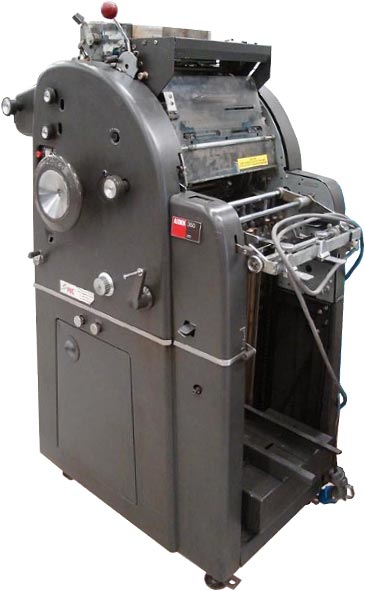 The first drupa trade show is held in Dusseldorf, Germany. drupa, which stands for ‘Druck und Paper’ (print & paper), is a specialist trade fair for the printing industry.

The Original Heidelberger Tiegel printing press is one of the highlights. Offset presses like the Roland Parva and Roland Ultra are demonstrated. 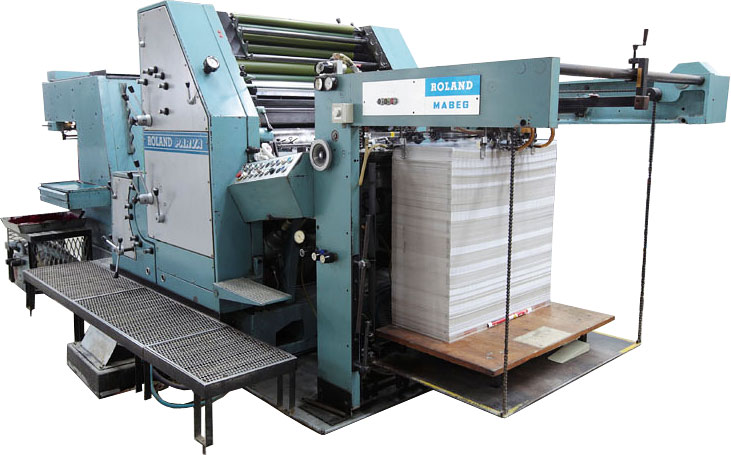 At the same show, five different models of Monotype and Linotype typecasting machines are on display. During the fifties, there are worldwide over 100,000 Linotypes in use. The image below shows the Linotype Model 31. 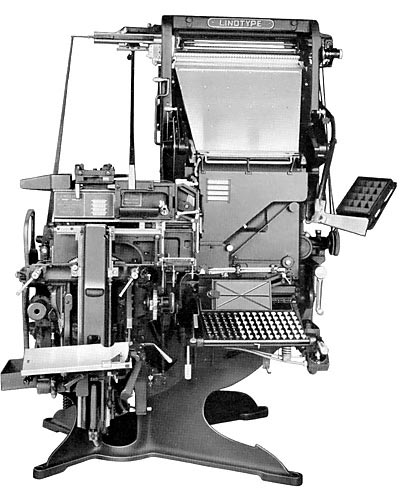 The Photon 200 composer is launched that same year. This keyboard based composer can output 16 fonts in sizes from 4 to 72 points. It is used for typesetting advertising texts for newspapers and for complex commercial printing jobs. The image below shows how this opto-mechanical device works. Light flashes generated by a strobe (not shown, to the right) pass through a rotating font disk containing all the characters of a font in reverse. To output an ‘M’ the system waits until the ‘M’ character on the rotating disk is in front of the flash, then the flash goes off and the disk only lets the light shaped in the form of that ‘M’ character through. This light goes through the lens turret that reduces or magnifies the character to the required type size. The light then gets deflected by a prism onto photographic paper. The optical system then moves to the right and the process is repeated to image the next character. Once an entire line has been photoset that way, the roll of photographic paper advances a bit so the next line can be imaged. Once an entire column of text has been imaged, the container holding the photographic paper is taken out of the machine and chemically developed in a darkroom. 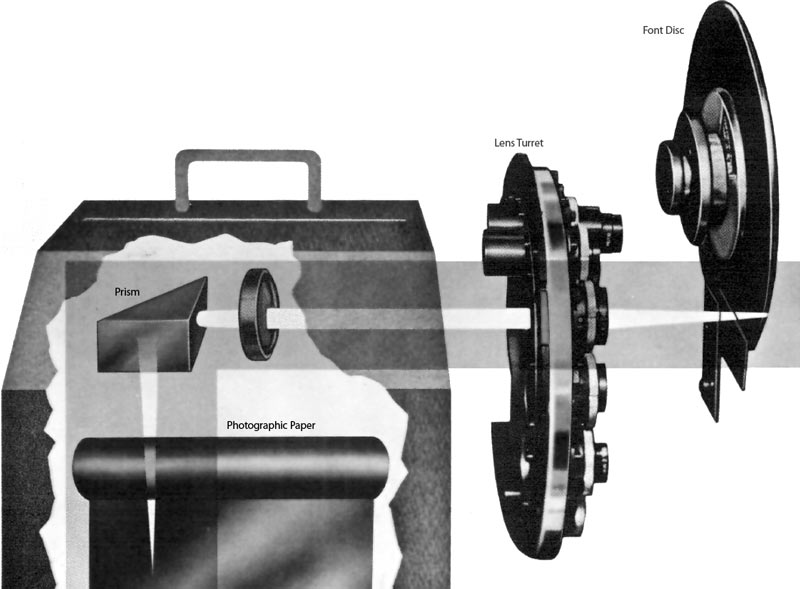 The Wonderful World of Insects is the first book that is completely typeset using a Lumitype. 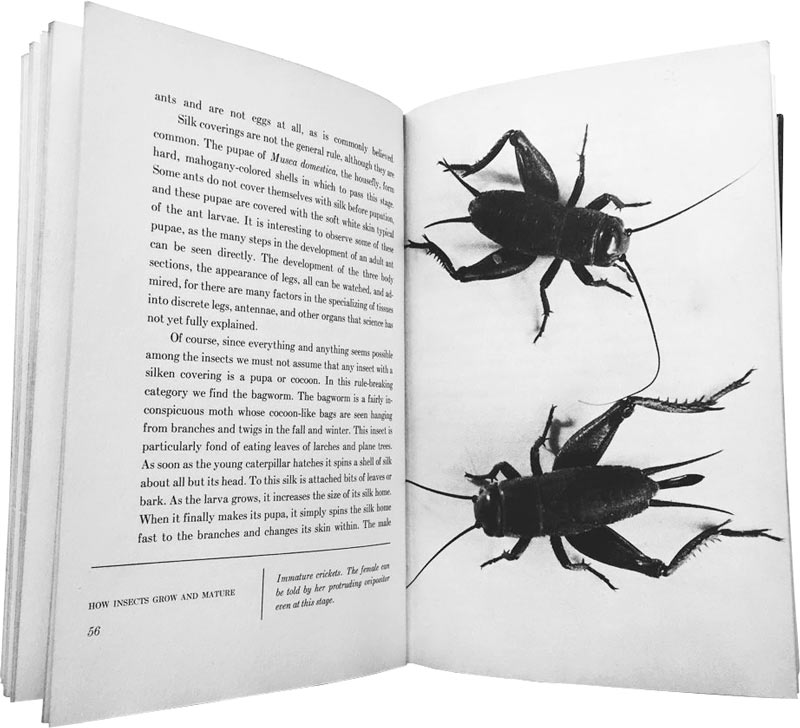 Only a few script typefaces are mentioned on this site, but Mistral could not be overlooked. It is designed by Roger Excoffon, who based it on his own handwriting. In lowercase it is a true connecting script, similar to cursive writing.

The Quincy Patriot Ledger is the first American newspaper that invests in photocomposition by installing Lumitype-Photon 200 systems. The machines, of which the output unit is equipped with a punch tape reader, glass type disks, and 12 lenses, are said to be three times more productive than hot-metal linecasters.

The Mergenthaler Linotype Company demonstrates a pre-production version of the Linofilm type-composing machine. The Linofilm consists of two parts, one containing a keyboard hooked up to a device to write punched tape, the other being the output unit. This unit contains a set of glass plates with a matrix of 88 characters inscribed on them. To compose text, characters from such a plate are exposed using an optical system that includes a shutter. This shutter, similar to the one used in the lenses of today’s digital cameras, consists of very thin, overlapping metal blades. Instead of always opening at the same point at the moment of exposure, it opens at the position of one of the characters on the glass plate. This mechanism is capable of producing 12 characters per second or 43,200 per hour. Optional units are available to still do text corrections on the punched tape and to increase the available font sizes up to 100 points.

The second drupa fair is a major success with 226388 visitors during 16 days. The show highlights are engraving machines for letterpress printing. Grapha, which is now known as Muller Martini, exhibits its first fully automatic saddle stitcher with an in-line trimmer.

Addressograph-Multilith introduces the Multi-1250 press. Together with the AB Dick 350, it will dominate the small offset (duplicator) market in the years to come. 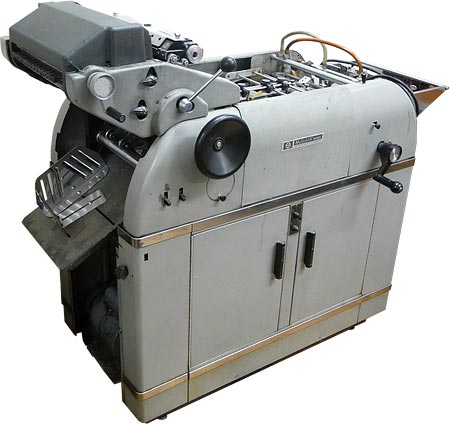 Howard Kettler designs the Courier typeface for IBM. It is originally used for their typewriters but eventually also gets shipped with operating systems, such as Microsoft Windows 3.1, and with many RIPs.

Linotype typesetting in a newspaper in Norwich, England. 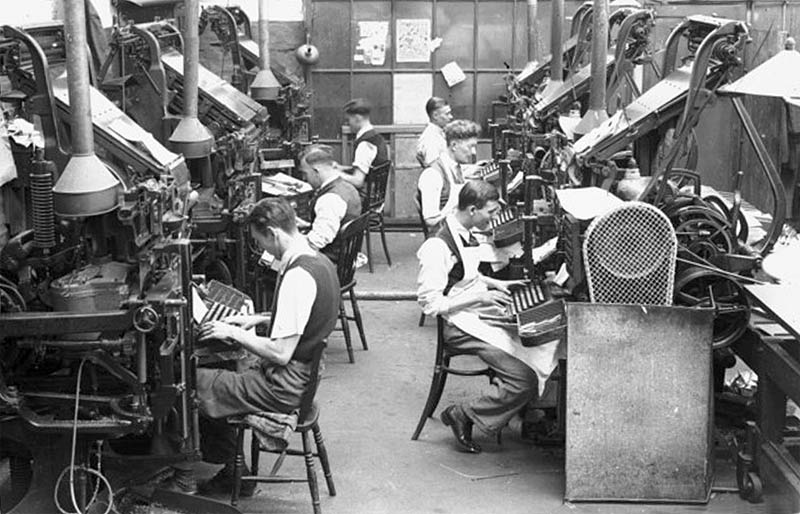 The picture below shows the cutting edge technology of the day: a 5 MB IBM hard disk is shipped to a customer. 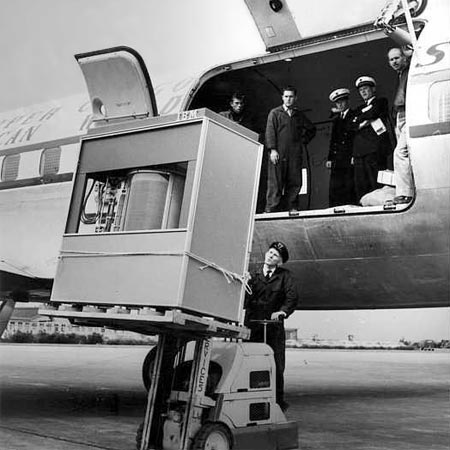 The Univers typeface, designed by Adrian Frutiger and marketed by Deberny & Peignot and Monotype, is one of the first commercially successful fonts that was initially designed for use on Photon photocomposition machines.

Below you see the typeface on a Lumitype-Photon font disc. 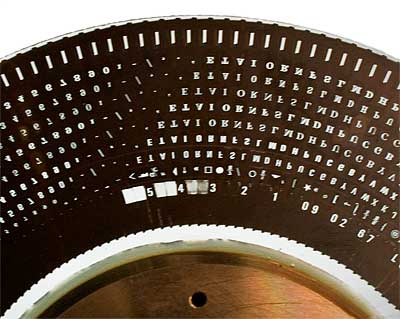 Another classic typeface from that same year is Helvetica, created by Max Miedinger with input from Eduard Hoffmann. In the example below the reworked version from 1983 is used. 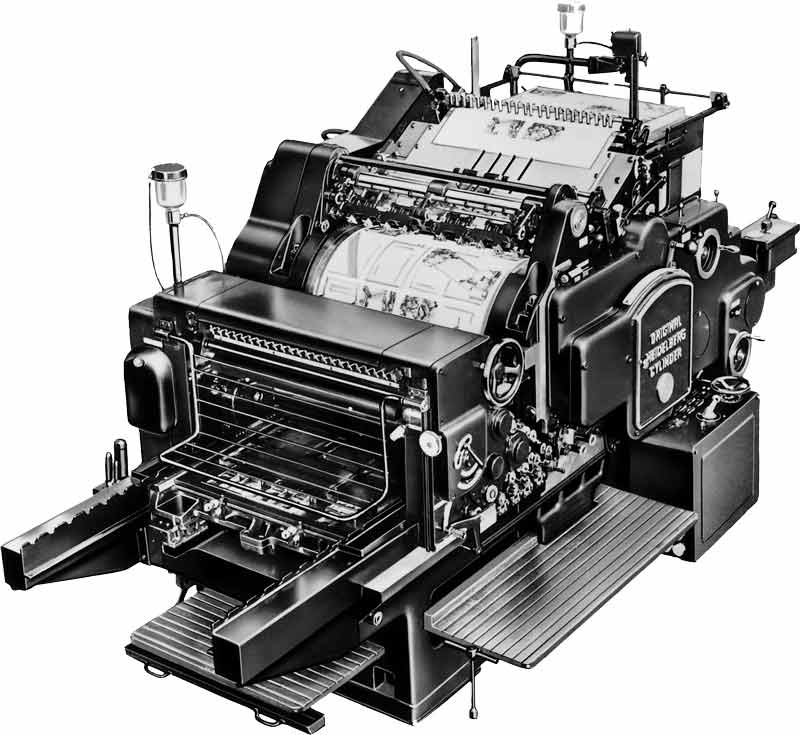 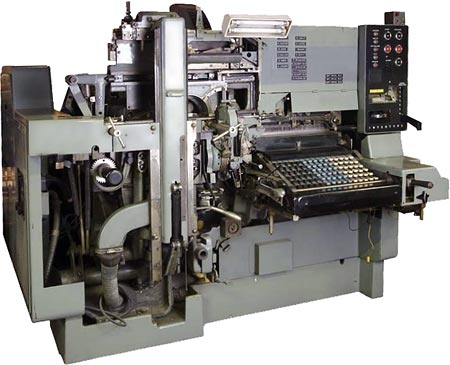 Russell Kirsch makes the first digitized photo by creating a 176×176 pixel scan of a photograph of his three-month-old son. The computer used wasn’t capable of storing more information. 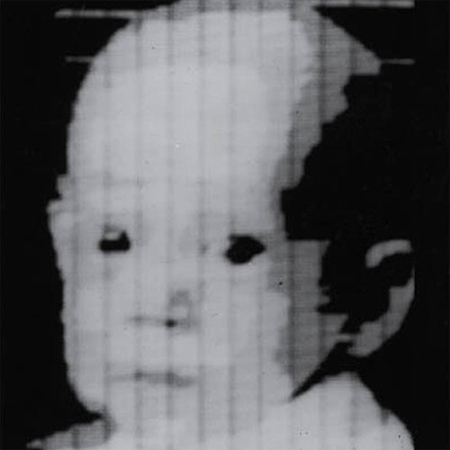 H. Berthold AG, a German company, introduces its first typesetting equipment. The Diatype is a desktop-sized machine for setting headlines and short pieces of text. By moving a trigger on the front of the machine the operator can select characters from its glass font master disc. The system is nicknamed the ‘duck-shooter’ in the UK. Typesetting equipment gets a lot of attention during the drupa 1958 show. 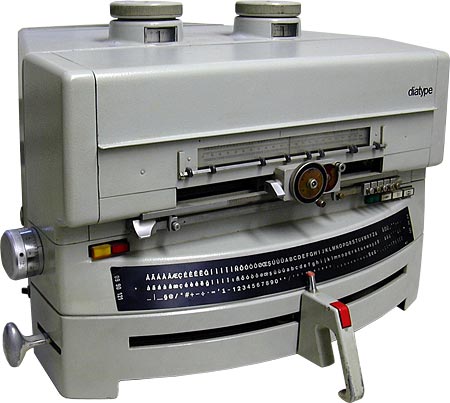 Another drupa novelty is the Hell Colorgraph, a flatbed system to scan and correct photographs. With a resolution of 500 ppi a 30 by 40 centimeter scan can take hours.

The Optima typeface, designed by German typeface designer Hermann Zapf between 1952-1955, is released. It becomes an instant success.

The Lumizip 900 sets a new speed record by imaging 200 to 600 characters per second or more than 2,000,000 per hour. It reads the text off a magnetic tape. The first book composed with a Lumizip is the ‘Index Medicus’, which is imaged in 12 hours. Producing the same book on a tradition Linotype would have taken almost a year!

The Xerox 914 copier can make up to six copies per minute on regular paper. It is a major step forward compared to the Model A, the first copier from 1950, which still needed two to three minutes to make a single copy.

Visual Graphics Corporation (VGC) introduces the Photo Typositor, which was invented by Murray Friedel. This phototypesetting machine is used for setting display type, such as large headlines or text on posters. This machine and its successors, models 3000, 3100 & 3200, remain popular for over two decades. The picture below shows the phototypositor 3200 from the collection of the Museum of Printing Arts in Leipzig. 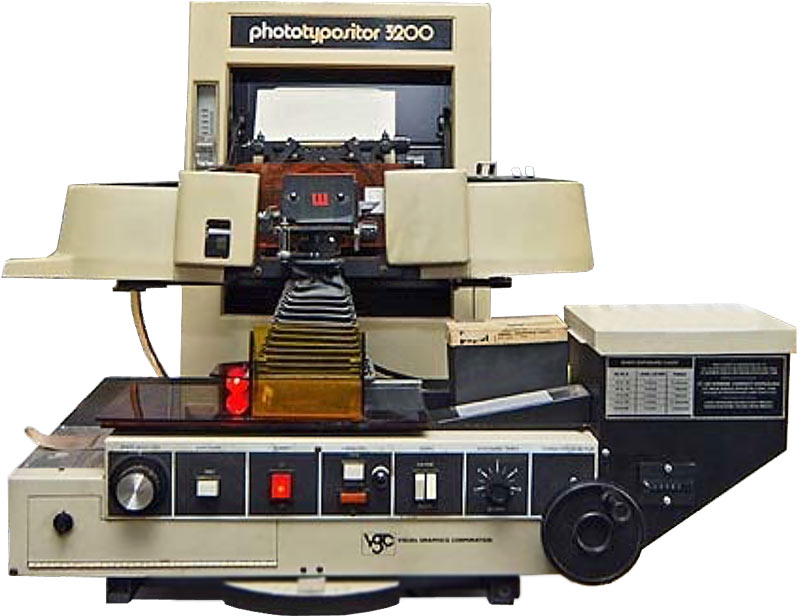 The Haas Type Foundry in Switzerland releases the Helvetica font, designed by Max Miedinger and Edüard Hoffmann. Within a few years, this becomes one of the most popular typefaces of all times. The sample below is from the slightly reworked Helvetica Neue 55.