Like so many other technogeeks I bought Walter Isaacson’s biography of Steve Jobs the day it came out. It is a pretty interesting read so I finished it in about a week. During the week-end I used the Kindle app on my iPad while nightly reading sessions were done with my phone.

One of the themes in the book is the obsession of Steve Jobs with creating elegant and well designed products. ‘Less is more’ was one of his mantras. In a minimalistic user interface every pixel had to be just right. While reading about this, I noticed how the Kindle app for iPad is still miles away from meeting this expectation. Below is a screen capture of that page, showing the landscape 2 column layout which I prefer on the iPad. 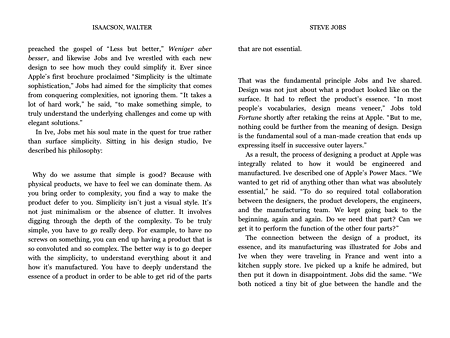 The Kindle and Kindle apps also try to adhere to the ‘Less is more’ principle. Next to the body text the iPad app displays only the name of the author and the title of the book. All buttons and other indicators are blended out. Unfortunately the app doesn’t quite get it right. Have a look at the composition of that page:

The first things that is annoying is the widowed line, the paragraph-ending line at the beginning of the second column. It becomes even more noticeable because of the blank space following it.

Another error is that the text of the two columns doesn’t line up properly. In newspapers they get this right every single day – working with a tight deadline and a layout that contains five or more columns. Why can’t the most popular e-reading app on the planet do this properly for two simple columns of text? Hasn’t anyone at Amazon ever heard of baseline grids?

On this page the text is pretty even but there are other pages on which the spacing between words differs wildly. Justifying text in a fairly narrow column is only feasible if words can be hyphenated. It is kind of odd that the Kindle app has a built-in dictionary and yet cannot hyphenate words.

One can argue that the above mistakes are understandable because it is a computer program that dynamically lays out the text. It cannot be as smart or style conscious as a real book designer. Some designer however defined the layout of the text area in the Kindle app and look how crummy that is. There is way too much empty space at the bottom of the screen, compared to the top part which looks fairly crowded.

I find it disappointing that after decades of computers being used to layout text, an e-reading application that is meant to display straightforward body copy still cannot get it right. Come on Jef Bezos, it is time you read that book about Steve Jobs and become our new ‘Less but better’ guru!

One thought on “Less isn’t more yet on the Kindle”