LAB is a color space, a system for describing, measuring and controlling color using hue, luminance, and brightness as the 3 key parameters. See CIE color space.

Paper used for various types of labels. It is usually coated on one side.

A clear gloss coating applied to printed material for strength, appearance, and protection.

A parallel lined paper that has a handmade look, usually used for high-quality stationery.

A thin transparent plastic coating applied to paper or board for protection and to give it a glossy finish.

Describes a horizontal orientation of a page format, as opposed to portrait, which is a vertical orientation.

Register refers to the process of aligning colors (plates) properly during printing. With lap register, the colors overlap slightly, as compared to butt register.

Abbreviation for Light Amplification by Stimulated Emission of Radiation: a device that amplifies a single frequency of light within the spectrum to create a directional, intense beam. That beam of light can be used to write data on a printing plate or film. Fortunately, lasers are also used in DVD-players and concerts so you can have fun with them as well.

Paper made especially smooth and dry to run well through laser printers.

A solid-state miniature exposure lamp emitting a small spot of light. Laser diodes are used in some imagesetters.

A paper cutting technique whereby laser technology is utilized to cut away certain unmasked areas of the paper. The cutting is a result of the exposure of the paper to the laser ray, which actually evaporates the paper.

A desktop output device that produces images from digital data on paper or film. The images can be text, graphics, or halftones. Somewhat like a photocopying machine, the laser printer’s cylinder is electronically charged to make it light-sensitive. The cylinder is exposed with a laser to create the invisible latent image that will accept toner particles. The toner is applied, the particles are transferred from the cylinder to the paper, and fused with heat and pressure.

In prepress late binding refers to delaying the conversion of data into a format that is optimized for one specific type of output as long as possible. This may include rendering pages before actually imposing them, making it easier to switch to a different press or press sheet size at the last possible moment. Keeping data in RGB until the job needs to be rendered is another example of a late-binding technique. The opposite of late binding is early binding.

An envelope with self-sealing adhesive which requires no moisture.

Edge of a sheet of paper being fed into a printing press.

A finishing method of perfect binding that allows a publication to lie fully open.

A drawing, sketch, or plan of a piece, page, or advertisement showing all elements in position, a ‘blueprint’.

A row of dots, hyphens, periods, or dashes used to lead the eye of the user across the page.

The space between lines of type in a block of text (pronounced ‘ledding’). Leading is usually expressed in points, like the size of the text itself. It includes the point size of the text; so 10 point text set with 10 point leading would have the lines of type touching each other. Conventionally a leading of 120% is used in a normal block of body text; so a 10 point type is normally set with 12-point leading.

A short paragraph set in a larger font size or different typeface that opens an article. It gives readers a quick summary of the story and provides a hook to entice further reading.

One sheet of paper in a publication such as a book or a magazine. Each side of a leaf is one page.

A folded sheet of paper which contains advertising or information about a specific topic such as politics, a local tourist attraction, an upcoming event, etc.

A metal die, either (flat, or embossed), created from the image or copy, which is then heated to a specific temperature which allows the transfer of a film of pigmented polyester to the paper.

A stiff heavy business paper generally used for accounting and records. It is similar to bond paper in its erasure and pen writing characteristics.

The quality of typeface affecting the speed of perception – not to be confused with readability.

The optimum length of a filament of ink.

Printing technique that creates animation by taking 2 or more images and then interlacing the images using vertical strips from each image (so if you had 4 images a,b,c & d, you would have vertical strips of the picture abcdabcdabcd). Then this image is printed and a lenticular sheet is placed on top, which is a clear plastic corrugated sheet. Then as you move left and right in front of the printed result, you can see the different images.

A company that markets rub-down or dry transfer lettering used in preparing artwork.

A fold where a three-panel piece has both side sections folded inward, one on top of the other. Each section is approximately 1/3 the length of the piece. Also known as a C-fold, tri-fold, barrel fold or wrap around fold.

A general term for a paper size that is suited for writing letters. In North America, it refers to a specific paper size (8 1/2′ x 11′).

– A sheet of stationery used for letters.
– The shapes of a character.

– The act or technique of drawing letters by hand. The text balloons in comics are usually done using lettering.

– The letters so inscribed

Printing that utilizes inked raised surfaces to create the image.

A printing process that combines offset printing with a letterpress relief printing plate.

The addition of space between typeset letters.

Abbreviation for Last In – First Out, a method of handling data in which the first element stored in a list or stack is also the last one to be retrieved.

In magazine and newspaper publishing, a quotation or edited excerpt from an article that is placed in a larger typeface on the same page. It leads readers into the article and can highlight a key topic. Also known as a pull quote or a call-out.

A single glyph (character shape) designed to be used in place of a particular sequence of two (or more) glyphs. The most common, used in most fine typography, are the so-called ‘f-ligatures’: fi, fl, ff, ffi and ffl. Below you see the ‘fl’ and ‘ff’ ligatures used in the word to the right. The typeface used is Adobe Caslon Pro, an OpenType font.

Type having finer strokes than a medium typeface.

In printing, lightfastness refers to the rate at which inks change color or get lighter as a result of being exposed to daylight, UV light, heat, and acids or alkalis.

A substance in trees that holds the cellulose fibers together. It is removed during the production of some types of paper.

Any artwork or type without continuous-tone gradations that can be photographed and reproduced without using a halftone screen.

Also called a pica ruler or type gauge. Used to measure typography, and for copyfitting.

A paper that emulates the look and texture of linen cloth.

A term expressing the proportional relationship of a desired response to the actually applied stimulus.

Adjust tone reproduction factors to render a unit ratio (1:1) between the desired values and the final result.

Term used for leading in typesetting. Measured in points, from one baseline to the next baseline.

A typesetting machine that could cast an entire line of type in one slug. The machine was invented by Ottmar Mergenthaler in 1890. Some newspapers and book printers kept them in production until the late 80’s! 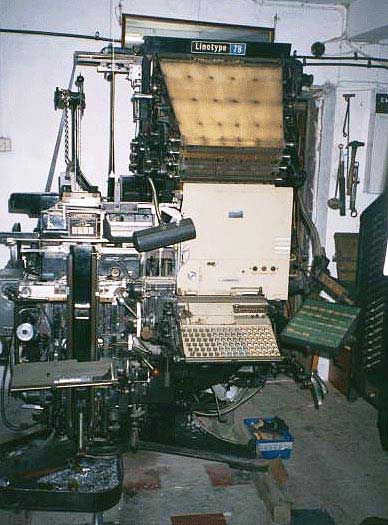 A paper that is coated with a special water-resistant material that is able to withstand the lithographic process.

How fast and/or how much mass moves along the axis.

A personalized graphic representation or symbol of a company, a product, a trademark, abbreviation, etc.. A logo is often uniquely designed for ready recognition.

In finishing a binding method that allows the insertion and removal of pages for continuous updating.

A small hand-held magnifying glass. In prepress, it is used to check details on printing plates or to align films properly. This is the small foldable Agfa loupe that I use.

The small letters in a font.

A picture whose most important details appear in the darker areas of the shot.

Abbreviation for Lines Per Inch, a measurement of the resolution of halftone screens.

Abbreviation for Line Printer. Back in the dark ages of computing, this was a printer that could print one line of text at a time. Nowadays LPR usually refers to a protocol that UNIX systems use to send data to an output device. One of the disadvantages of LPR is that it is unidirectional: a computer can use LPR to send a page to a RIP but a PostScript error message or another warning cannot be sent back to the computer.

A value corresponding to the brightness of color.

Abbreviation for Lempel, Ziv, and Welch – a compression algorithm that is named after its 3 inventors.