E13B is a font that is optimized for magnetic ink character recognition (MIRC), a technique used in the banking industry for processing cheques.

A scanner process that increases the apparent edge sharpness of the reproduction images by intensifying the difference between the light and dark side of the image edge or the point where different colors meet.

A finishing method whereby the edges of the pages of a book or catalog are colored to mark different sections.

The finish of paper surface that resembles an eggshell achieved by omitting the calender process.

An oval image shape similar to an ellipse.

An elongated, or oval halftone dot that is used in the midtones and vignette areas to minimize the midtone jump in dot gain at the point where dots are large enough to connect.

A measure of space that is equal to the square of the type body – the larger the type size the larger em space. An em space is sometimes specified as the amount of the indent of the first line of type in a paragraph. Em is so-called because, in early fonts, the letter M was usually cast on a square body, such as 10 points high and 10 points wide.

A dash, one em long, that is used to separate parenthetical phrases within a sentence or to indicate missing words.

In finishing a strong letterpress impression of an image on the back of a sheet of paper. The image is raised.

The photosensitive coating on a substrate that reacts to light.

A term that describes a glossy coating on paper.

A dash that is half the width of an em dash.

Attaching the final sheet of a signature of a book to the binding.

A grade of uncoated book paper with a smooth uniform surface.

A printing process whereby images such as copy or art are etched onto a plate. When ink is applied, these etched areas act as small wells to hold the ink; paper is forced against this die and the ink is lifted out of the etched areas creating raised images on the paper.

Abbreviation for End Of Chapter

Abbreviation for End Of Message

Abbreviation for Encapsulated PostScript, a file format used for artwork, images or even complete pages. This site has a page dedicated to the EPS file format.

Refers to a file in the DCS file format

Abbreviation for Encapsulated PostScript File. You can read more about this file format on this page.

Abbreviation for electronic publication, a file format for publishing books and other types of content in a reflowable fashion. This means that the content can adapt itself to fit the available screen space. An EPUB file can be viewed on a 3.5″ cell phone as well as a 10″ tablet or the 22″ monitor of a desktop computer. An EPUB publication consists of a single file that has the file extension .epub. More information on this file format can be found on this page.

The slight change of adjoining pixels to average pixel values. This smooths an area and eliminates the graininess of a digital image.

the side-by-side placement of type characters to form a line.

Maurits Escher (1898-1972) was a Dutch graphic artist, most recognized for spatial illusions, impossible buildings, repeating geometric patterns (tessellations), and his incredible techniques in woodcutting and lithography. I like his work a lot so his appearance in this dictionary is just an excuse to show one of his magnificent creations. 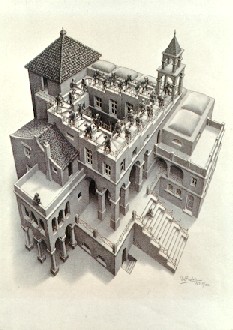 The Montreal, Quebec Canada-based developer and manufacturer of large format precision imaging systems for the electronics and graphic arts industries.

Abbreviation for Enhanced Screen Quality: Monotype’s term for its TrueType fonts that have been very carefully hinted.

The form used by the printer to calculate the project for the print buyer. This form contains the basic parameters of the project including size, quantity, colors, bleeds, photos etc.

One who computes or approximates the cost of work to be done on which quotation may be based.

Text that would from time to time accidentally appear in publications back in the days when Linotype machines were used for composition. When an operator made a typo, he would use all the keys of the first two vertical columns on the left side of the keyboard to indicate that this line of text was incorrect. Occasionally such incorrect slugs of text would still wind up on the printing plate. The letters on the keyboard were arranged by letter frequency, which happens to be ‘etaoinshrdlu’ for the English language. In other languages, the same type of mistake was ‘esait nrulo’ (French), ‘enis ratulo’  (German), ‘eaosr niltu’ (Spanish) or ‘aeion lrtsu’ (Italian).

The process of producing an image on a plate by the use of acid.

The use of smaller-sized capitals at the beginning of a sentence without the use of larger-sized caps.

In page composition, a resident list of words that cannot be hyphenated correctly using the available hyphenation algorithm. A user-defined exception dictionary contains words that a user wants to hyphenate differently than the hyphen points suggested by the algorithm.

Type with a width greater than normal, producing a rectangular effect.

A plug-in circuit board used to expand the functions of a computer.

An additional font designed to accompany a standard font, providing a range of characters not included in the standard character map like ligatures, small capitals, old-style figures, etc. Expert fonts are just about useless without their companion standard fonts.

To output data in a format that can be read by another software application.

The stage of the photographic process where the image is produced on the light-sensitive coating.

The quantity of light that is allowed to act on a sensitized material, such as film, paper, or plate, or an electronic sensor, such as CCD

The amount and duration of illumination striking a sensitized material, such as film, paper, or plate, or an electronic sensor such as a CCD.

In typesetting, fonts that have broadened character, widths, but no increase in height. Extended is the opposite of compressed. Sometimes referred to as expanded.

A wider version of a regular typeface

A white pigment added to a colored pigment to reduce its intensity and improve its working qualities.

A small utility for the Macintosh operating system, that gives the operating system new capabilities. Applications like InDesign, Photoshop, and Acrobat support a similar kind of tools which are called either extensions or plug-ins.