Finishing refers to all the activities that are performed on printed material after printing. This includes binding, the fastening of individual sheets together, and decorative processes such as die-stamping, embossing or laminating.

Paper stock may need to be cut or trimmed more than once during the production of a job: 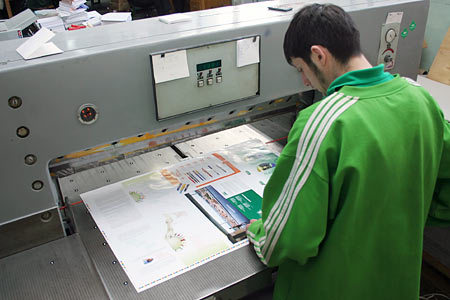 Cutting and trimming are usually done using a guillotine cutter. A stack of sheets is placed on the bed of the cutter and the angled stainless steel blade cuts through it at the desired position. All the stacks are subsequently often placed in a jogger, a vibrating table that squares the stacks of sheets.

For magazines, books,… large press sheets need to be folded into signatures. This involves a series of right-angle folds in which the sheet is folded multiple times. Folding a sheet once makes four pages, two right-angle folds make eight pages,…

Other types of work require parallel folds in which two or more folds which are oriented in the same direction are made in a sheet. This is typically done for leaflets or brochures. Some common types of folds are:

These processes involve placing (folded) sheets in the correct sequence. Collating refers to sorting individual sheets into sets. Many laser printers and copiers have a collating function. Gathering is a similar process but it involves folded signatures. Gathering machines have up to thirty slots or pockets in which signatures are fed manually or automatically. The machine then gathers the signatures into what is known as a book block. Such machines can also have a binding function, such as for instance a stitcher.

There are different ways of binding sheets together. Below are the most commonly used techniques:

Embossing is the process of adding a relief image to a book cover or other printed material. Sometimes an ink or foil is used to accent the relief image. When the stamped image is left as is, this is called blind embossing. Debossing is the opposite, creating a sunken image on the substrate.

Foils can be a real eyecatcher when applied to book or magazines covers. This is especially true for metallic foils which reflect light and add a silvery or golden glow. Such foils are applied using a pattern on a heated die that presses a roll of foil against the substrate. Adding the foil can be combined with embossing in a process called foil embossing.

Laminating refers to bonding a separate material or layer of material to the printed matter. The most common type of laminating is sealing the print between two layers of a plastic material. A typical example of this are menu cards for restaurants which often need to be both sturdy and water-proof.

Converting refers to all of the finishing operations which transform a printed piece into another physical form. This includes bagmaking and boxmaking but more general processes such as bookbinding, waxing, coating, laminating, folding, gluing or die-cutting are also considered converting operations.

Irregularly shaped printed matter such as coasters or labels are cut out of the substrate in a process called diecutting. The die contains knives or creasing rules that have been prepared specifically for a certain shape.

Products like envelopes, stamps or labels need to have a moistenable adhesive applied.