TIFF or the Tagged Image File Format is a file format that is strictly used for bitmap data. TIFF files don’t contain text or vector data, even though the file format theoretically would permit additional tags to handle such data. Despite being one of the earliest file formats for images, it is still very popular today. It is a highly flexible and platform-independent format that is supported by numerous image processing applications and virtually all prepress software on the market.

The file extension for TIFF files is .tif even though .tiff is also used occasionally.

The flexibility of TIFF makes it very easy to write a TIFF-writer, but very difficult to create a fully TIFF compliant reader. The need for well-defined rules has caused a few TIFF-sub standards to appear. For prepress, TIFF/IT is a prime example but that file format is no longer actively used. Another substandard is TIFF/EP, a version of TIFF optimized for digital photography.

TIFF images can contain more or less anything:

For grayscale, RGB and CMYK images, 8 bits (256 levels) are used per channel but this is not a limitation of the TIFF file format. The file specifications also allow 16-bit channels. Although this feature is also supported by recent versions of Photoshop, many layout applications and drivers cannot yet support these data types.

TIFF supports a large number of compression algorithms. The lossless algorithms that can be used are:

TIFF also supports lossy JPEG compression, which doesn’t seem to get used that often. Below are the options available for saving TIFF files in Adobe Photoshop CC. The available options depend on the image type.

When the TIFF file format was first developed, transparency wasn’t something that applications in those days supported. The file format is however flexible enough to be able to deal with it. The above screen capture of Photoshop’s Save menu shows that you can save a TIFF with transparency data. The transparency mask can be 8-bit, allowing for a nice smooth transition from the background in a layout to the masked image on top. I tested this with Adobe InDesign CC which handled a transparent TIFF just fine.

Be aware however that the TIFF file format may support transparency, but that this does not guarantee that any application capable of processing TIFF files can also handle the transparency data embedded in the file. The Adobe suite can clearly do this but other layout or drawing applications may simply ignore any transparency information.

TIFF files cannot have more than 4 Gigabyte of raster data. However, this is 4GB of compressed data, and so if the compression ratio is high enough, theoretically a TIFF image could be much larger (in fact, 2**32-1 pixels square). There is an unofficial ‘BigTIFF’ variant that supports larger file sizes, but support for it is limited.

How to edit TIFF files

All professional image editing applications on the market are capable of opening TIFF files. My favorite is Adobe Photoshop.

How to convert TIFF files

There are tons of converters that can convert a TIFF file to a JPEG, PNG, EPS, PDF, or other file format. Google is your friend.

The history of TIFF 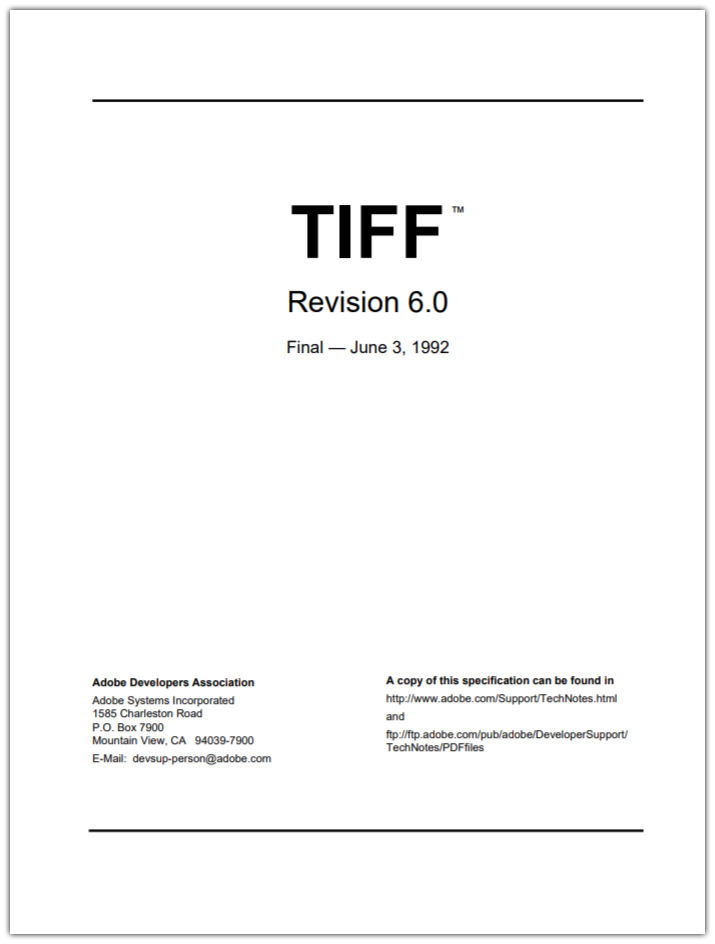 TIFF was developed as a universal image file format by Aldus (makers of PageMaker) in 1987. The most recent specifications, TIFF 6, were released in 1992. It is pointless to study older versions of the format since everybody sticks to the TIFF 6 specs. Since then, Aldus has been bought by Adobe so Adobe now holds the copyright. They have not released any new versions of TIFF which is not necessarily a bad thing since standards that last long are well supported and understood in the market.

58 thoughts on “The TIFF file format”