Transparency in PDF files refers to objects on a page, such as images or text, which are transparent or ‘show through’.

This effect can be used for a number of reasons:

PDF 1.4 (the file format supported by Acrobat 5) was the first version of PDF that supported transparency. This PDF release came to market around the same time that Adobe Illustrator 9 was launched. Transparency was ‘the’ big new feature in that release. Other applications like Corel Draw had already supported transparency for years but had to resolve to a trick to generate a printable file: when creating an EPS file or printing a drawing, the application had to remove or calculate the transparency effects. This process is called ‘flattening’.

The challenges when transparency is flattened

Transparency is a very complex technology. The Adobe technical documentation on it is over 100 pages long. To simplify things, applications tend to split up a page in small square areas, called atomic zones. The effect of transparency is then calculated for each separate atomic zone. The stitch between atomic zones can sometimes show up on-screen (and even in output) as thin white lines.

Another stumbling block is the fact that a PDF file can contain transparent objects with different color spaces. Adding a drop shadow to a spot color element that sits on top of a CMYK background (or vice versa) is an example of a design that challenges the RIP or workflow that needs to process the job. Making an RGB image slightly translucent on top of a CMYK background is another example. Issues with color handling can show up as color shifts in (part of) an image.

Sometimes transparency involves the interaction between a vector based object, such as text, and a bitmap object, such as a digital photograph. Under some circumstances, software needs to partially convert a vector object to a bitmap. This is frequently the reason why text fattens up a bit on output.

On top of all of this software applications needs to work out how to best handle groups of objects that are transparent. Should each object, in turn, be blended into the background or should it be done on the entire group? Older prepress systems can really slow down when they need to flatten transparency.

Adobe was well aware of these issues. In 2006 they announced a complete rewrite of their RIP technology, called the Adobe PDF Print Engine (or APPE). It replaces the CPSI that was used in previous generations of RIPs and prepress workflows. As its name implies, APPE is much more efficient in handling PDF files that contain transparency. The original 1.0 release still had some issues but the version that is nowadays used in workflows from Agfa, Kodak or other vendors is pretty reliable. Ironically enough Adobe’s main competitor, Global Graphics, had already adapted their interpreter, called Harlequin, much earlier. Modern systems based on the latest versions of this product can also handle transparency without too much effort.

How transparency gets added to a PDF

Sometimes designers are not even aware that their creation contains transparent objects. These are the actions that add transparency to a layout:

When do such transparent objects lead to a PDF file with transparency in it?

How to check if a PDF contains transparent objects 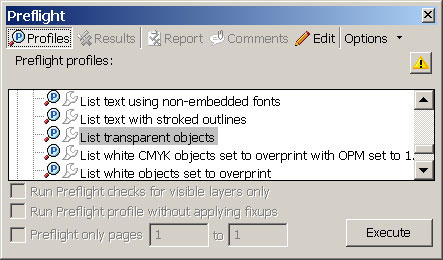 Other preflight engines like PitStop Professional can also be used to detect transparency.

Tips & tricks to avoid having issues with transparency

You can download the Adobe designers guide to transparency here. Quark has a similar document for QuarkXPress 7 transparency.

Adobe has produced an excellent white paper on the use of transparency in print production.

12 thoughts on “Transparency in PDF files”