To lower costs and improve productivity printing presses do not print a single page or artwork at the time. In one single go a press may print 4, 16 or even 96 pages. Imposition refers the prepress process of positioning pages or artwork on press sheets in such a manner that the job can be printed and finished properly and efficiently. It is a fundamental step in preparing a job for print and it requires a lot of insight in the way the entire production process works. That means imposition is also handled differently for commercial, newspaper and packaging jobs.

What is common for all three types of work is that the imposition work is not limited to positioning pages or artwork on a sheet. Part of the process is making sure that all the marks that are needed by the printing presses and finishing machines are added. This includes cutting marks, color bars and collation marks. All these production-related graphic elements are called the furniture.

For multipage documents such as magazines or brochures, all the pages are combined in signatures, which are printed sheets that are folded to the required page size.
The example below shows an imposition scheme that can be used for imposing 8 A4 pages on an SRA1 sized sheet.

Signatures contain multiple pages. An imposition scheme determines how those pages will be positioned on the signature. How many pages are combined, how these are positioned and which additional information is added to the signature is determined by many parameters:

2. The number of pages of the printed product
The compositor must determine how many sheets are to be printed to create a finished book. Some products, such as digitally printed

3. Job content
It doesn’t happen very often but sometimes the content of pages, such as large flat tints or dark images, require a change in the imposition template to make the job easier to print.

4. Printing press
The choice of printing press has a major impact on the imposition process. It affects both the work style and the position of the pages on the sheet.

– Instead of making separate plates for the front and back, you can also combine both sides on just one set of plates. The first time the press sheets are fed into the press, half of the pages that are printed qre front pages, the other half are back pages. Then you flip the paper stack over and feed the pages through the press a second time. Once printed, the sheets are cut in half before folding, creating two identical copies. Depending on how you rotate the stack of press sheets, the work style has a different name:

– There are also a couple of special cases.

Sometimes binding styles are combined within a single job. This is called mixed binding.

The position of the pages on the sheet
Sheetfed presses have a grip: their clamps grab the paper to feed the press sheet through the press. That influences the distance from the bottom of the press sheet to the start of the first page.

Press marks
The control system of the press also dictates if registration marks, a colorbar and other elements need to be added to the sheet.

5. The binding style
Many publications contain so many pages that they are printed using multiple signatures. When there is no binding involved, such as with posters, inserts, business cards, or leaflets, this is usually called flat work.
When a job requires multiple signatures, then how these signatures are bound also affects the imposition scheme. The two main binding styles are:

– Saddle stitched binding
All the sheets are printed and folded, after which they are inserted inside each other and one or more staples are applied to the spine. This means the first sheet contains both the first and the last page of the publication. The example below shows the front and back of the three signatures of an 48 page saddle stitched job imposed for an 8-up press. 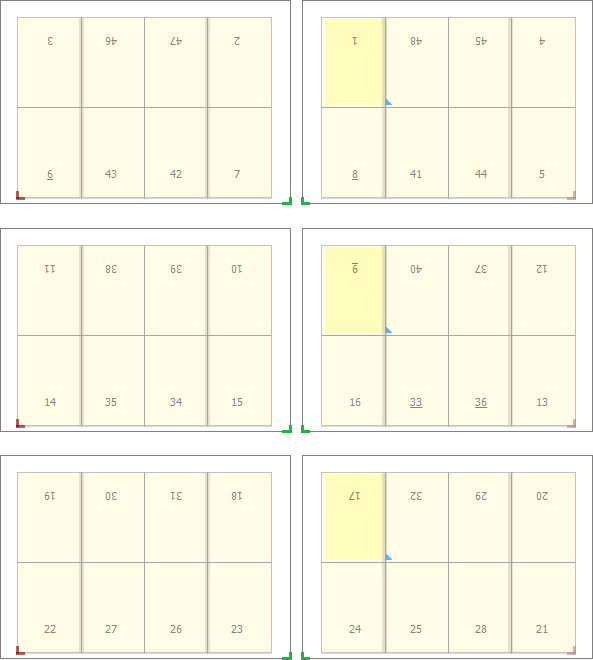 – Perfect bound
All the sheets are printed and folded, after which the folded sheets are stacked on top of each other. Glue is applied to the spine and a cover sheet is wrapped around the book to encase the spine. The means the first signature contains all the pages from the first part of the publication. The last pages are on another sheet. The example below shows the front and back of the three signatures of an 48 page perfect bound job imposed for an 8-up press. 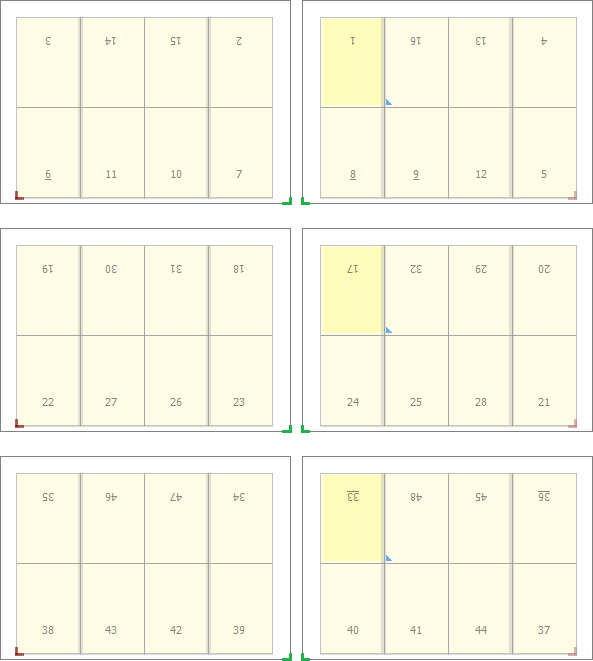 In some cases the imposition has to address physical properties of folding sheets, such as creep, bottling and web growth. In general, the bigger the signatures or press, the more these effects come into play.
– Creep is also known as binder’s creep, pushout or thrust. It refers to the gradual extension of the inner signatures of a saddle-stitched job beyond the edges of the signatures that surround them. After cutting this means the inner signatures are less wide than the outer ones. To compensate for this effect, the content of the pages of the inner signatures is shifted slightly. This is called shingling.
– One effect of folding a signature is that the pages might bottle: they get rotated or skewed a bit. This is mainly an issue with very large signatures that get folded a lot. To compensate for this effect the pages are counter-rotated a tiny bit in the imposition program.
– While paper travels through the press, it can get stretched or deformed. This effect is called web growth and it occurs mainly with large thin or lower quality rolls or sheets of paper. The deformation can happen across colors (on the magenta cylinder, the paper is wider than on the black cylinder) or it can even happen within one single separation (the leading edge of the sheet is slightly smaller than the trailing edge). On web presses paper stretches across the web. On sheetfed presses the deformation is mainly in the direction of paper travel. The deformation can be linear, non-linear, trapezoidal or pillow-shaped. High-end imposition software can compensate for web growth.

6. Binding equipment
To be documented

7. Cutting equipment
To be documented

8. Paper grain
The fibers in many paper types are aligned in a specific direction. When pages are folded, this is best done parallel to the paper grain. That means the direction in which pages are oriented on a press sheet is partly determined by this grain. This does not mean all the pages are oriented in the same direction. Pages are frequently positioned head-to-head.
Sometimes the paper grain is irrelevant or not an issue (e.g. when printing cards)  which means a sheet can be filled with pages that do not all have the same orientation. That is called a dutch cut.

Imposition used to be a manual process but nowadays it is handled by software.

Imposing newspaper pages is less demanding than imposing commercial printing jobs. Newspaper web presses are large but the plates are usually small and multiple plates are mounted on each cilinder. These newspaper plates contain either one or two newspaper pages. When two pages are combined on a single plate, that is called page pairing.

In CtP systems loading and unloading plates takes time, so that are some newspapers that use large plates, image multiple pages on a single plate and then cut up the printing plate to create smaller newsletter plates. This obviously means that the imposition template needs to be adapted and registration marks need to be added for the automated cutting system.

In packaging a single artwork or variations on the same artwork are typically repeated multiple times. Since boxes usually have an irregular shape, the artwork may need to be interlocked to minimize waste. That is called nesting. When the nesting is done based on the actual die cutting data, it is called true shape nesting.

Wikipedia has an article on imposition.