This page documents the major events in the history of prepress from the first half of the 20th century. During this era all typesetting is done using molten lead and mechanical devices such as Linotypes. Sophisticated, often surprisingly large camera’s are used for handling line-art or images. The first photocomposition devices which use photographic film or paper to set type are developed in the 1940s.

The Linotype Ideal is a more cost-efficient version of the Linotype typecasting machine, making typesetting affordable for smaller companies. The image below of a person operating a Linotype machine is from The Book Of Wonders, a 1915 book about ‘the wonders of nature and the wonders produced by man’.

Hermann Ridder founds the International Typesetting Machine Company, or Intertype as it is usually called. Several Linotype engineers join the company and help design a simpler typesetter with fewer, but more standardized, parts than the Linotype. The first Intertype is installed in late 1912 at the New York Journal of Commerce. Below is an advert from 1925. 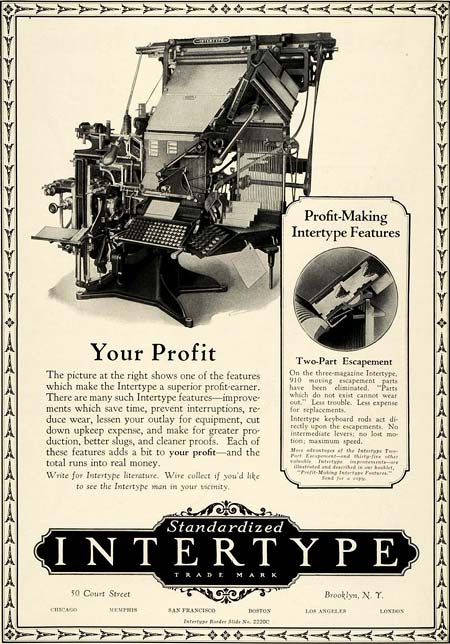 Édouard Belin’s develops the Belinograph, a device to sending pictures using a regular telephone line. Sending halftone photographs by telegraph or telephone is called wirephoto, telephotography or Belino. The Associated Press begins its Wirephoto service in 1935, using a picture of an airplane crash. 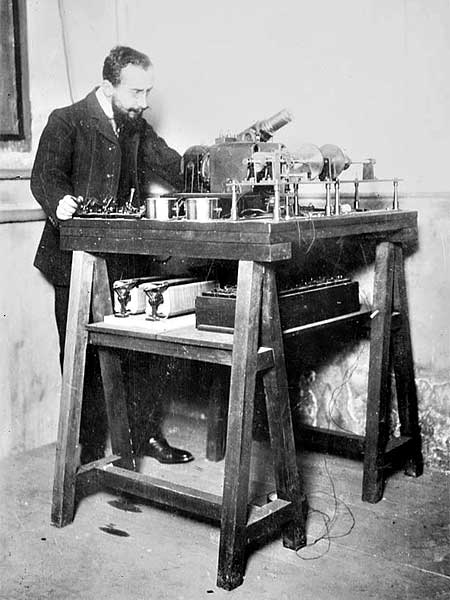 The London Underground starts using Johnston as its corporate typeface. A redesigned version is still in use today, making it one of the world’s longest-lasting examples of corporate branding. Edward Johnston’s student Eric Gill will use this sans-serif typeface as the model for his own Gill Sans. 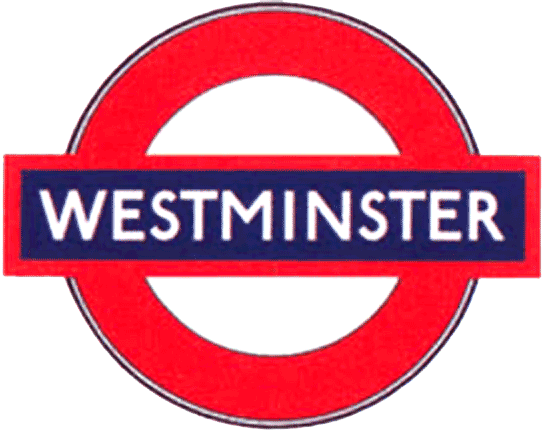 The Barnhart Brothers & Spindler type foundry release Cooper Black, a heavily weighted, display serif typeface designed by Oswald Bruce Cooper. The typeface is used a lot in advertising during certain decades while being maligned during others.

Walter W. Morey invents the teletypesetting or TTS process, in which a punched paper tape is used to drive a typecaster such as a Linotype or Monotype.

Eric Gill creates Gill Sans, a sans-serif typeface that becomes popular after being selected in 1929 as the unique typeface for the London and North Eastern Railway posters and publicity material.

A superficially similar typeface from the same era that is still popular today is Futura, created by German typeface designer Paul Renner.

Stanley Morison creates an updated version of Bembo for The Monotype Corporation. It is a recreation of a typeface originally cut by Francesco Griffo around 1496. The typeface got its name from being used in a book authored by Cardinal Bembo.

Many consider Excelsior, a serif typeface designed by Chauncey H. Griffith, the best newspaper typeface of all time.

Xerography, a dry photocopying technique, is invented by Chester Carlson. A decade later the Haloid Company, which will later become Xerox, licenses the patent for commercial use.

The Bobst AP 900 Autoplatenautomatic flatbed die-cutter can process over 4000 sheets per hour, compared to 1200 for a manual press.

In Switzerland Martini develops the first adhesive binding machines. Adhesive binding, or perfect binding as it is usually called, is mainly used for paperback books.

Marjory Collins photographs the production of the New York Times in order to document home front activities for the U.S. Office of War Information.

It all starts in the newsroom. These copy readers check all dispatches from the US reporters outside New York City. 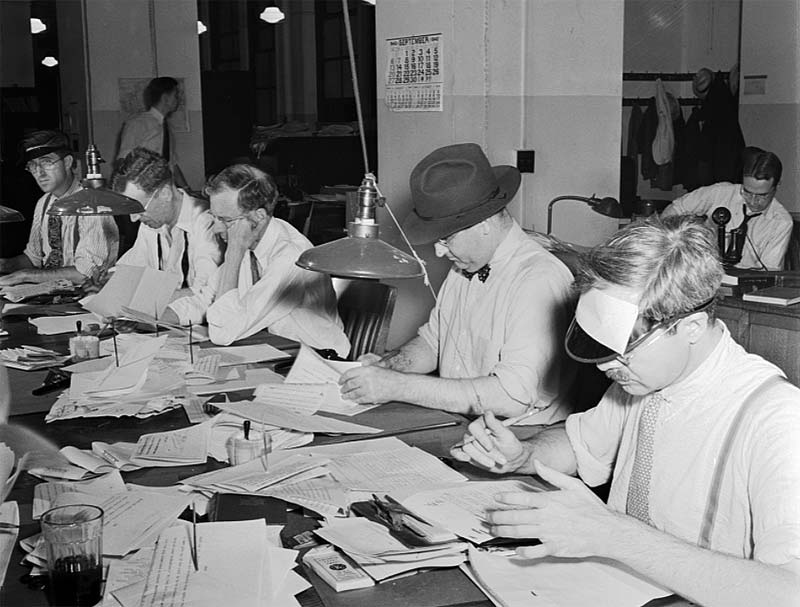 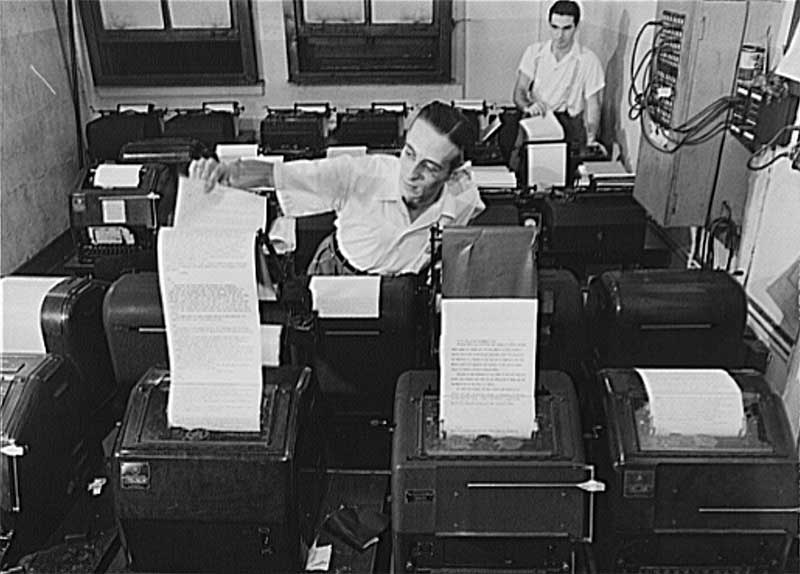 Reporters and rewrite men write stories or are waiting to be sent out. The rewrite man in the background get the store on the phone from a reporter outside. 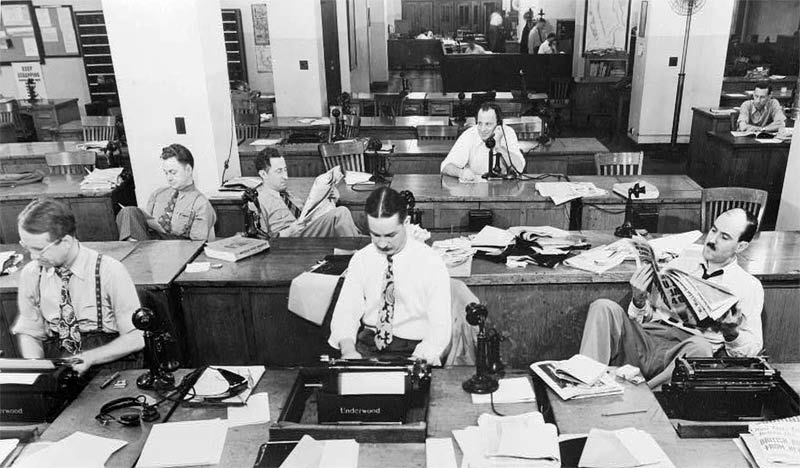 Text is composed on Linotype machines. 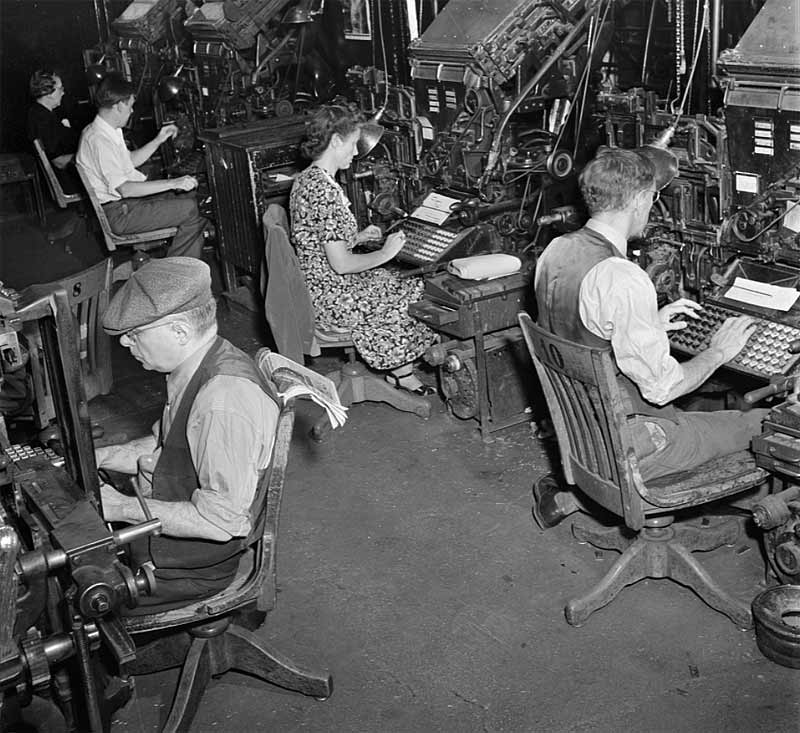 Here you see the index being typeset manually with a Linotype on the background. 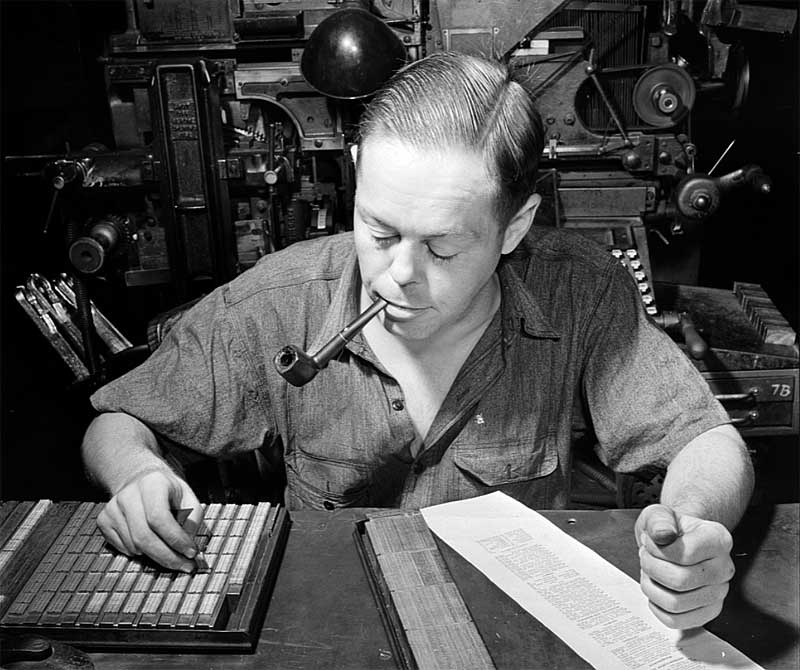 Meanwhile an operator in the photo engraving department is examining the dots on a screened image before the negative is transferred to a zinc printing plate. 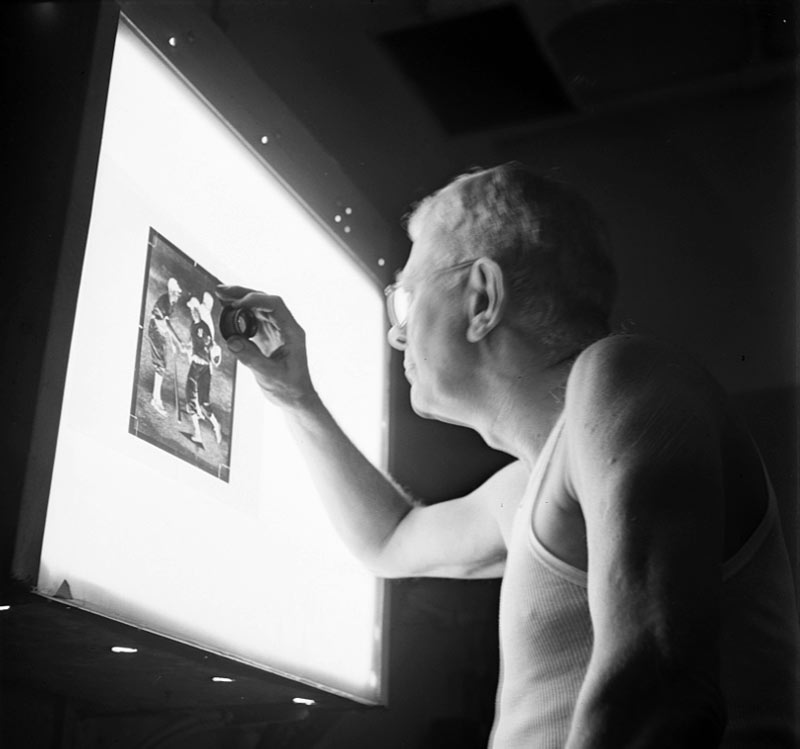 A compositor is making up the sports page in the composing room. 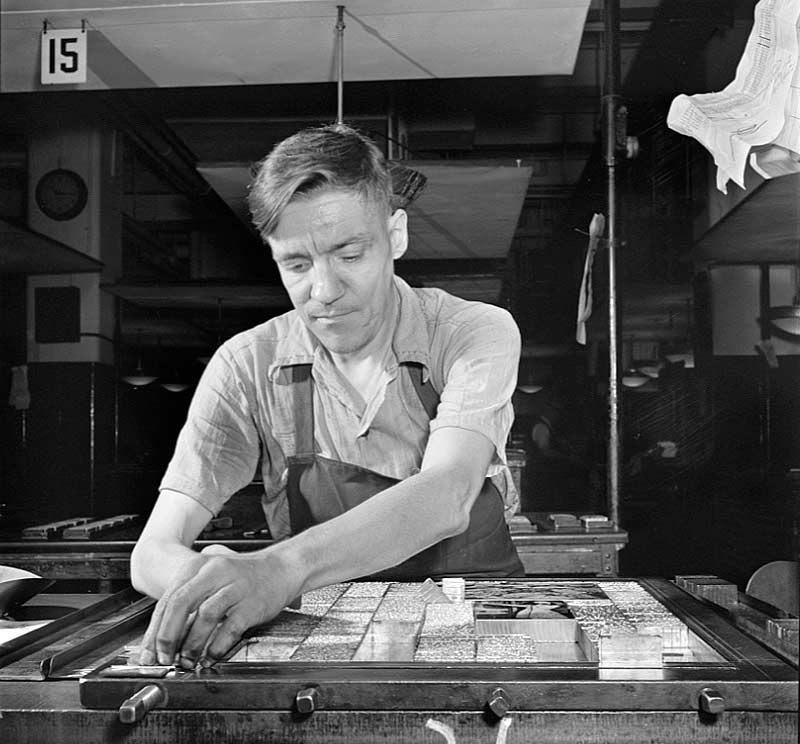 In the plateroom plates are casted and prepared for mounting on the press. A marker indicates the cylinder position. 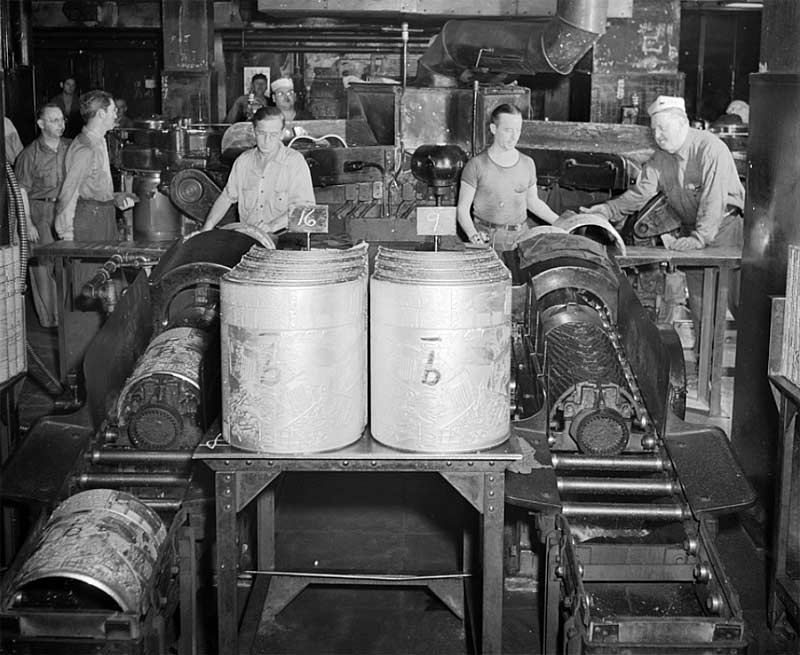 Pictures from the printing process can be found on the history of printing page. The entire collection of 84 photographs is hosted here.

The Intertype Fotosetter, the world’s first photocomposition device to use photographic media to set type, is installed in the Government Printing Office in Washington.

Photon announce their first machine, the Lumitype, which was based on the work of two French engineers. The development of such machines is made possible by advances in high-speed photography and electronics. The technology is often referred to as ‘cold type’, typesetting done without the casting of metal. Its commercial breakthrough will take place in the early fifties. The image below shows the Lumitype 550, a machine from 1965. 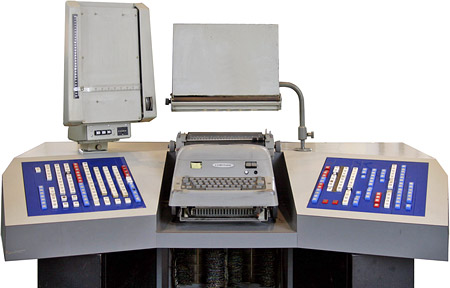 That same year the July issue of Fortune magazine contains the first commercial scanned color image. It is produced using a scanner built by the Austin Company.